RF Shielding, what do you do with yours? 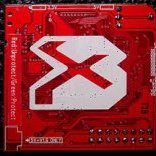 By nikeymikey,
June 12 in Hardware Mods