So it seems after a decade and a half, the itch has returned. 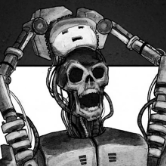 By mjkthirdeye,
May 17 in New Member Introductions