Just Received My XBox That I Bought for Parts 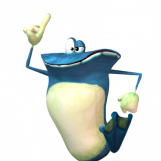